During the early 1970s I discovered my father’s 8mm movie camera buried deep in a closet in our basement (I also discovered some old Playboy magazines in that closet, but that’s another story). I had some fun making films that were so awful I can’t even stand to think of them, but one clever thing I did with the camera was film some cross country meets and a track meet. Recently I had these old films converted to DVD, and I wanted to offer them to any interested party. If you know people who ran from the classes of 1972, 1973, 1974 or 1975, please let them know of this unique offer as they may be interested in obtaining a copy. The pictures on this page are "snapshots" of the DVD while watching it on my computer. Here is what is on the DVD:

November 25, 1971 – Turkey Day Meet vs. Notre Dame @ Hamden
From 1968-1971 the half-time break of the Greenbowl game featured a cross-country meet with our District League rival. Upsets were the norm here. In the premiere race in 1968 Tom Hollander defeated Armand Morgan who had been Hamden’s top runner all year. Steve Brown upset Hollander in 1969, and Brown reprised his victory as a senior (no surprise there) in 1970. The 1971 race featured seniors Brian Cohen, Hamden’s top runner in 1971, and Bill Werth who was better than Cohen in 1969 and 1970. I did not film this meet, but I saw the photographer after we had seen it at the cross-country banquet and asked him if I could borrow the film. After he lent it to me I never saw him again after that and have claimed squatter’s rights to the film, although now that I have it on DVD, if he wants it back, whoever he is, it’s available.

October 26, 1972 – New Haven County Championship @ Cheshire
I was injured and through for the season by this time and made myself useful by filming some meets. This meet also featured a junior varsity race, a rare occurrence for a large meet.

November 3, 1972 – Hamden vs. Sheehan @ Brooksvale Park
Somewhere there is a film of a X-country meet vs Eli Whitney in 1970. I was disappointed that the photographer failed to film me so I made sure I filmed everyone who crossed the finish line as well as getting some candids. This race was our last dual meet of the season. We ran the old, road course for this meet and split it with a junior varsity and senior varsity race. It was a beautiful November day and nearly everyone turned in their personal record for the course. There is a hilarious finale to this meet.

May 10, 1973 – Hamden vs. Lee Track Meet @ Hamden
With some help from Blaine Edele, we filmed this track meet vs. Lee held on Hamden’s gravel track. There are lots of candids of different spectators including Luca Brasi, Don Corleone's fabled hit man.

Using Mr. Westburg’s summaries that he distributed at the cross-country banquets as an aid, I have identified nearly every person on the DVD. If you’re name is in the list below, it means that I have captured you on film and you appear on the DVD. In alphabetical order, here is everybody I can identify, (S) = Spectator: 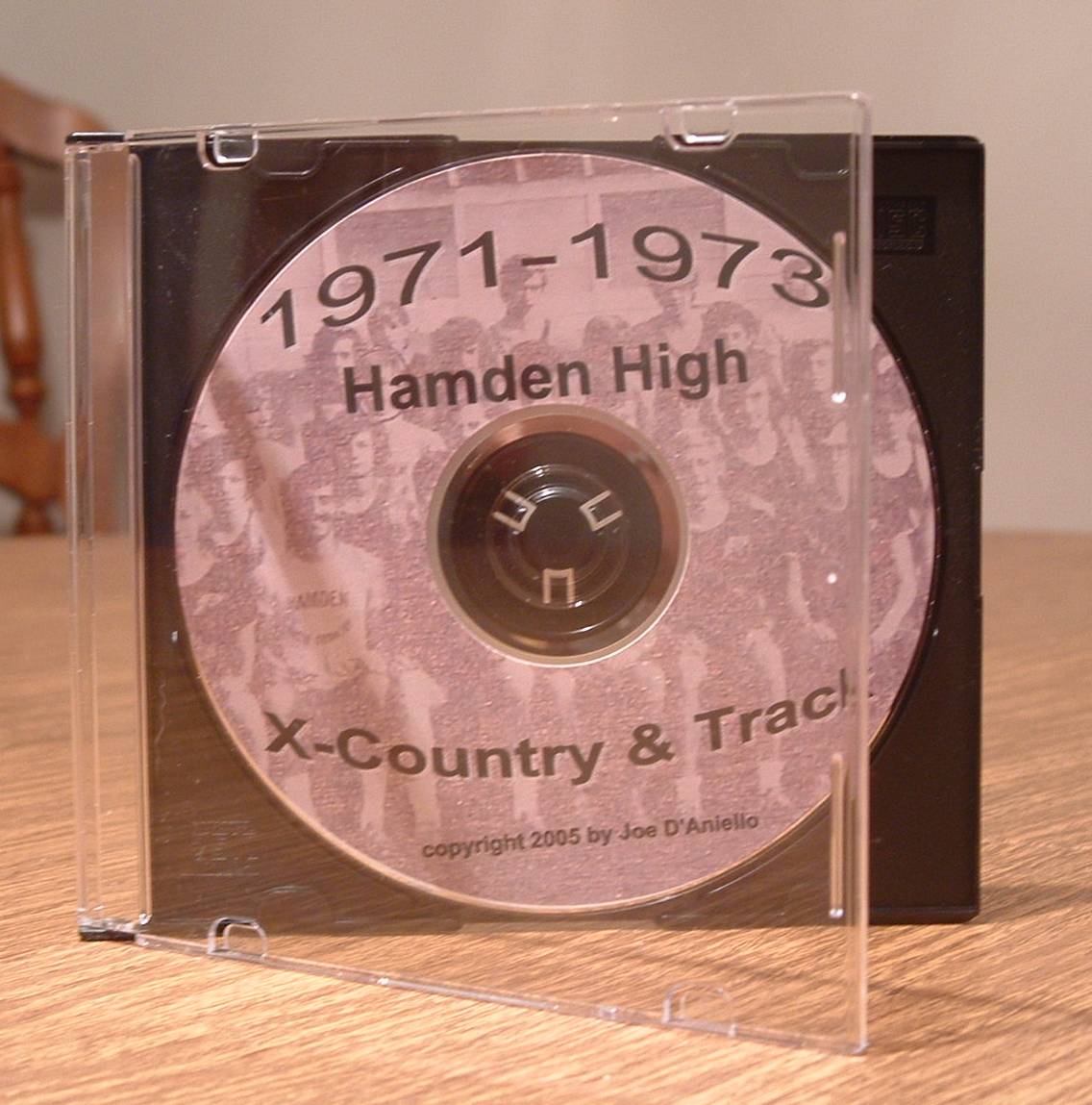 Taking into consideration the cost of transferring it from 8mm film to DVD and the cost of copying each DVD, I tried to price it reasonably at $15 per DVD + $2 for shipping. In addition to the DVD you will get a transcript indicating every person on the DVD and the time they appear on it. If you would like to purchase one, please send $17 to:

You can also pay via Paypal to email address jvdaniello#aol.com (change # to @). If you pay via Paypal, make sure to tell me your name and address. I'm sure you'll get a lot of enjoyment out of seeing yourself and your friends "in action."

PS: Your computer's DVD software might have a "snapshot" button. Clicking it while the film is in action or paused will allow you to a create bitmap file of the frame. Those files can be printed either with your home printer or at a photo store.